It doesn’t take too much to make me angry, but I did become extremely incensed by this particular interlude. It was in an episode of Daffy Duck as his Space hero creation Duck Dodgers in the 24th and half Century. Dodgers meets an alien and is surprised to find that the Alien speaks back to him in his own language. “Oh, so you speak American?” exclaims Dodgers. “No”, I screamed at the TV, “he speaks English, and so do you!” I almost wrote a letter to Warner Brothers asking them to correct this and publish an apology. I was getting angry with American English. I suppose it makes no difference if you put your car in a Gaarage as opposed to a Garage. They all have Garage shelving, especially if you’ve got them from https://www.garage-shelving.co.uk/ , but that’s the problem it feels a bit like your language is being taken away from you.

Actually I shouldn’t be too hard on Daffy Duck as he gets a rough ride of it pretty much all the time, so I should cut him some slack. And in a way his right there is a definite difference between how we British speak English and how our North American cousins say it. There is in fact a whole song that celebrates this.

“You say tomato and I say towmatoe. You say Potato and Powtatoe…”, The singers agree that they should, on this basis, end the relationship that they are cultivating. That might seem a little extreme, but it does quite jar when there is such a difference. The reason is relatively simple. The Pilgrim Fathers were the first settlers. They were mainly from the East of England and had a very distinctive accent. Of course, this is not the only influence. North America is a place made up of a multitude of migrant cultures especially Italian, Irish and East European. This has meant that the English language in the USA has been through the equivalent of a hedge backwards at times. The most notable difference is where the letter s is replaced by the letter z. This became very clear where the state of English sat when programs like Word started suggesting that the word Modernise should be spelt Modernize and Colour did not need the letter u. American English is more phonetic because, as we’ve seen above it had to take in many other cultures for it to work. 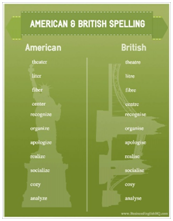 What are the main word definition differences? UK English first;

Chips – French Fries (this causes no end of problems for British families when they ask for Chips and a bag of Crisps turns up).

Courgette – Zucchini. Same problem as a above just healthy. Plus, this is a French v Italian confusion.

Holiday – Vacation. Again, many bemused looks from the British family as they get asked if they’re enjoying their Vacation.

Football – Soccer. Now obviously they’ve got this totally wrong. They play that helmet Rugby game and call it football and now one ever kicks a ball!