Nobody can resist the American Breakfast, a rich and abundant breakfast, with both sweet and savory ingredients.

The buzzword for American breakfast is variety. In fact, anyone who wants to try to prepare at home this traditional meal in the United States can indulge themselves in the choice of ingredients and opt for either version sweet and for that salt, or directly to both! The idea of ​​such a hearty breakfast dates back to the early twentieth century when in the morning it was customary to eat the leftovers from the previous evening, who managed to satiate for most of the morning. Over the years, many recipes for American breakfast have been invented, based on the concept that breakfast represents the most important meal of the day and therefore must provide the right energy to face it.

Pancakes and eggs, with long American coffee and orange juice, are the undisputed protagonists, but there is no shortage of toasts, bagels, muffins and the lighter version with yogurt, cereals, and berries. In short, to prepare an American breakfast just follow your tastes! In this article, you will discover all the delicacies of the American breakfast and also the recipe for the complete one. First, though, here are the mistakes that you shouldn’t commit when having breakfast:

The pancakes are the king’s undisputed American breakfast. Prepared with flour, eggs, milk and butter , they can be eaten both sweet and savory. The most classic and famous pairing in the United States is that of pancakes with maple syrup and a knob of butter on top, but they can also be served with a mix of berries , banana slices and chocolate sauce or with ingredients savory, such as eggs and bacon. Finally, pancakes lend themselves to numerous reinterpretations of the traditional recipe: for example, many Americans love them made with chocolate chips inside or with the lighter and dietetic version, based on chickpea flour or soy milk.

As for the English breakfast, eggs also play a fundamental role in the American breakfast. Perfect to be eaten with pancakes or to be served on a salty toast or muffin, Americans love to taste them in many variations, accompanied by a nice cup of coffee and orange juice. For this, there are numerous recipes to prepare. The most famous ones are:

Scrambled eggs: scrambled eggs in a pan, which are eaten or smooth. Or with the addition of other ingredients such as smoked salmon, mushrooms or cheddar.

Eggs Benedict: poached eggs usually accompanied by a few slices of smoked salmon or bacon and sausage. Unforgettable hollandaise sauce as a condiment. 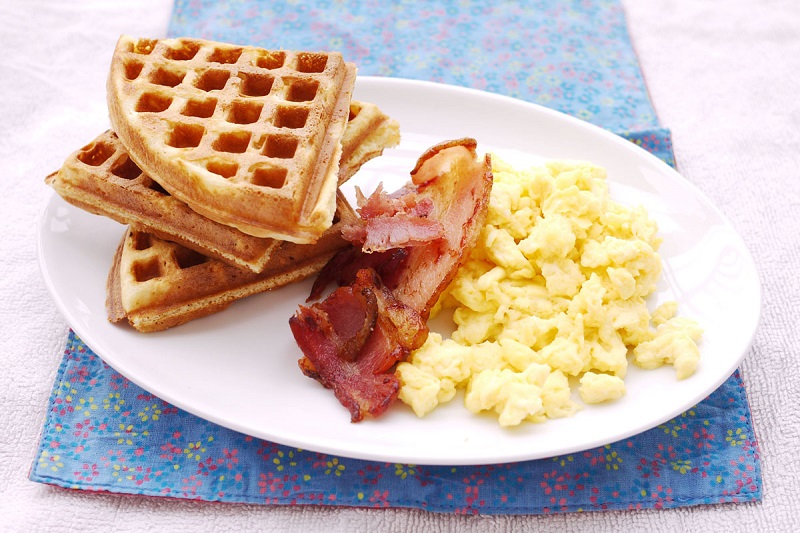 A valid alternative to pancakes is waffles. It is a sweet waffle, traditional from the Netherlands but which has now become part of the American breakfast. To prepare these delicious desserts, the same ingredients as pancakes are used: flour, eggs, and butter with the addition of sugar. Once the mixture is obtained, pour everything on a hot plate. In America, waffles are usually eaten either with maple syrup or with chocolate syrup, then garnished with fruit.

If there is one thing that is not missing in the American breakfast, that is the desserts. In fact, on working days it is easy to see Americans crowding the streets of big cities, such as New York or Los Angeles, holding a coffee in the typical paper cup and a sweet treat, a bit like we Italians do with croissants. In the United States, donuts, muffins, and cookies are preferred. The donuts are the typical donuts, fried and then glazed in the most varied ways and with the most disparate colors: the most famous are those with chocolate, vanilla or strawberry, with a sprinkling of colored sugars.

The muffins, however, are soft cakes similar to plumcake. Just like donuts, there are many variations for muffins too, including chocolate, blueberries, carrots, cinnamon and even salty, with ham and cheese. Finally, cookies are the most famous gluttonous biscuits in America, based on butter and chocolate chips, perfect for being drenched in coffee! 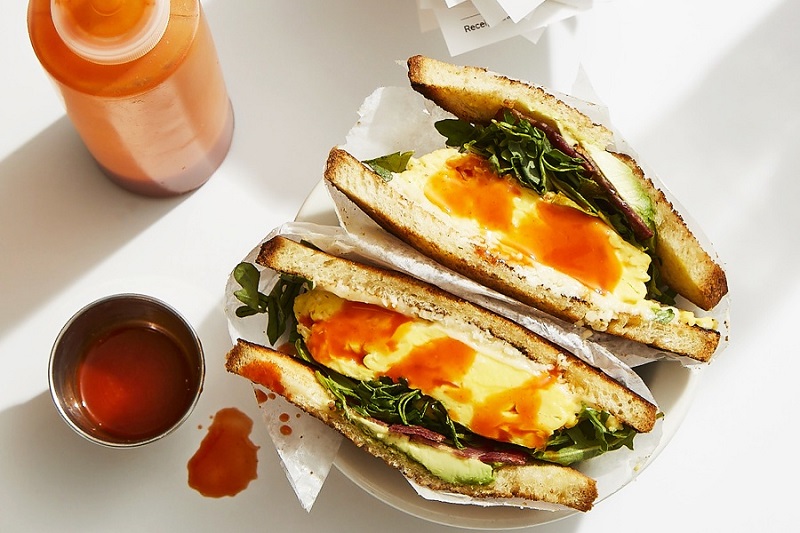 Bagels are savory bread donuts, which are cut in half and stuffed with spreadable cheese and smoked salmon or with ham and vegetables. Or even in the sweet variant, with butter and jam or with traditional peanut butter. The french toast, however, is slices of bread before the wet egg and then fried. Americans love them both in the sweet version, with maple syrup and fruit. Or in the savory version, served with eggs and even bacon.

Whether in the case of a savory breakfast or a sweet one, the drinks that accompany this meal are:

American coffee: the most famous in the United States. Which is obtained by pouring boiling water into the coffee through a filter?

-Latte macchiato: in America, this drink is simply called “Milk”.

Unlike the English breakfast, the American breakfast provides the union of two flavors, the sweet and the salty. It is a rich and abundant meal, not surprisingly it is considered the most important of the day. However, the full and traditional American breakfast recipe is not normally prepared for working days. But on the weekend, when you can enjoy all the food in the calm and serenity of your own home. If you happen to try it at the hotel or want to make it yourself at home, then you can’t miss the classic pancakes with maple syrup, eggs – torn or bull’s eye -, bacon and hash brown, or potato pancakes similar to rostì. If desired, pancakes can be replaced with French Toast or a toasted bagel.

The “light” note of breakfast is low-fat yogurt garnished with cereals and fruit, which Americans call ” granola “. All this must be accompanied by coffee, rigorously long, and a glass of orange juice or juice. No tea, that is reserved for the English Breakfast!

How to cook millet and what are the benefits of this cereal?

3 Tips To a Healthier Summer Season

How to make a vanilla cake